COVID-19 Vaccination | Appointment registrations for the 12-15 age group are being accepted. | Now offering a limited amount of walk-up vaccinations daily for all people 16 years of age and up.

How Transcranial Magnetic Stimulation is being used to fight major depression

In the early 1900s, psychiatrists observed that naturally occurring seizures could temporarily relieve symptoms of severe mental illness and began experimenting with various methods to induce seizures as a therapy. By the early 1940s, electroconvulsive therapy (ECT), also known as shock therapy, had been developed and was gaining popularity as a safe and effective treatment for certain psychiatric conditions. The treatment involves delivering a brief electrical impulse to the brain which causes a short seizure and improves symptoms over time. As psychiatric research matured, ECT was eventually recognized as the most effective short-term treatment for major depression and is still widely used today for this indication. However, ECT treatment has certain drawbacks that limit its use. These include frequent initial treatments (i.e., 2-3 times per week), insertion of an intravenous (IV) line, administration of general anesthesia and muscle relaxant medication, and risk of memory loss. While ECT is generally very safe and performed as an outpatient procedure, patients struggle to maintain a normal lifestyle during treatment due to post-anesthesia recovery, driving restrictions, and dependency on family or friends for transportation and monitoring. 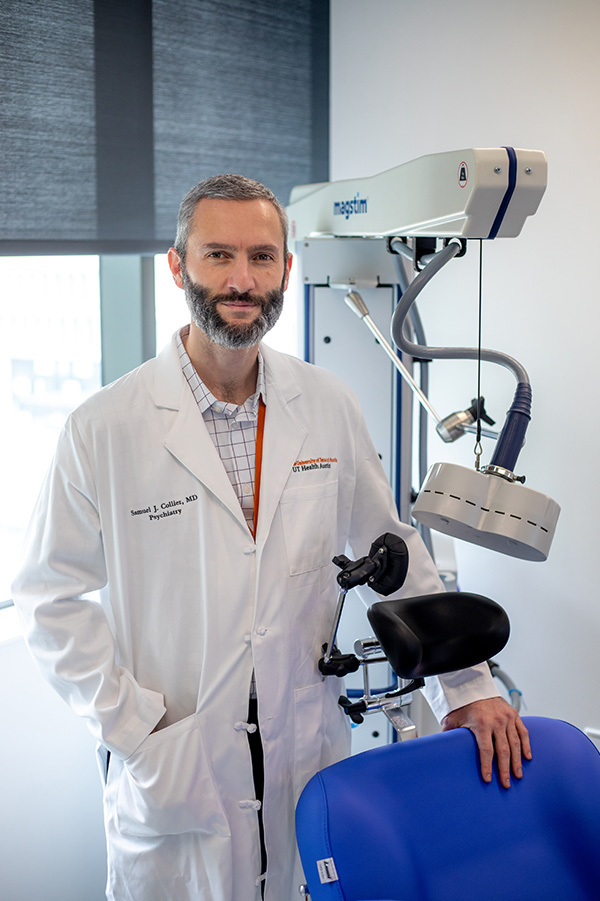 Transcranial magnetic stimulation (TMS) is currently used in the treatment of major depressive disorder and serves as an alternative to ECT. TMS is typically prescribed when antidepressants have failed to provide relief or patients cannot tolerate side effects. Unlike ECT, TMS is a noninvasive procedure with limited side effects. TMS involves delivering a series of focused magnetic pulses to an area of the brain (left dorsolateral prefrontal cortex) known to be underactive in major depression. During TMS treatment, an electromagnetic coil is placed on the scalp over the left prefrontal cortex. An electrical current is passed through the coil, generating a strong magnetic field. This stimulates brain cells (neurons) to fire normally again. Importantly, this form of stimulation is done without causing a seizure or requiring anesthesia. While patients do require TMS five days per week initially, they can safely drive as well as return to normal activities following each treatment.

UT Health Austin’s Director of Treatment-Resistant Depression, Samuel Collier, MD, explains, “There’s a particular center, a brain structure, called the left dorsolateral prefrontal cortex that in neuroimaging studies of depression has been shown to be hypoactive, meaning it isn’t working optimally. With this powerful MRI-strength magnet we’re able to focus a magnetic field to stimulate neurons in that area to fire and depolarize. So, the idea with TMS is that we’re ‘waking up’ a part of the brain to alleviate symptoms of major depression.” 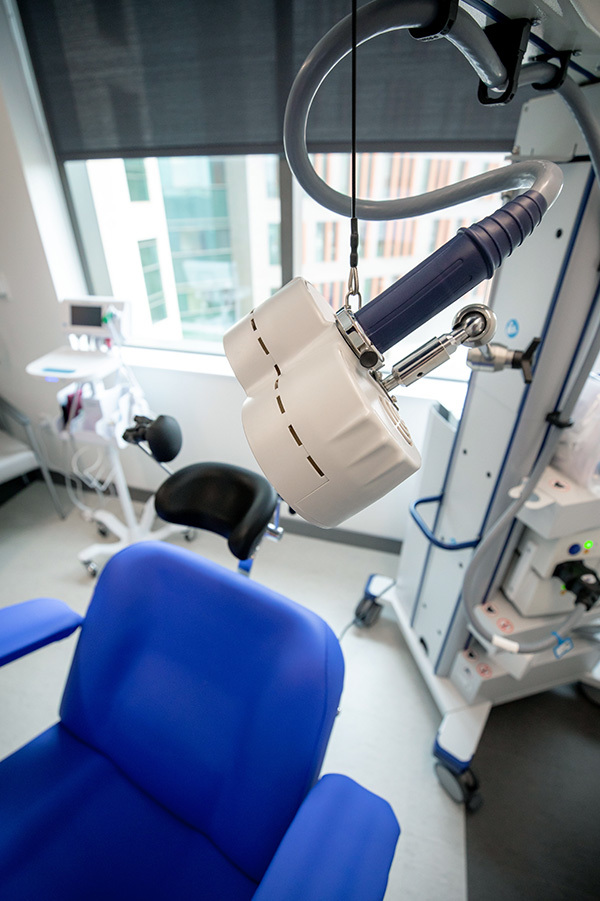 “We are offering the new variant of TMS called iTBS, which means intermittent theta burst stimulation,” says Dr. Collier. “This newest treatment paradigm is a faster, more tolerable protocol administered at lower intensities and shorter intervals. It is able to be delivered in just over three minutes versus the standard 19 minutes, which makes it efficient and easy for busy patients to get treatment and return to everyday life.”

TMS is a safe and well-tolerated treatment with few known adverse effects. Side effects are generally mild to moderate, improve shortly after an individual session, and decrease over time, allowing patients to return to their daily activities after treatment.

Common side effects include:

“The beauty of TMS is that it’s super safe and tolerable. The most common complaints are headache and some occasional scalp irritation,” shares Dr. Collier. “There is a very slight risk of seizure, but that is exquisitely rare, especially when patients are screened carefully.” 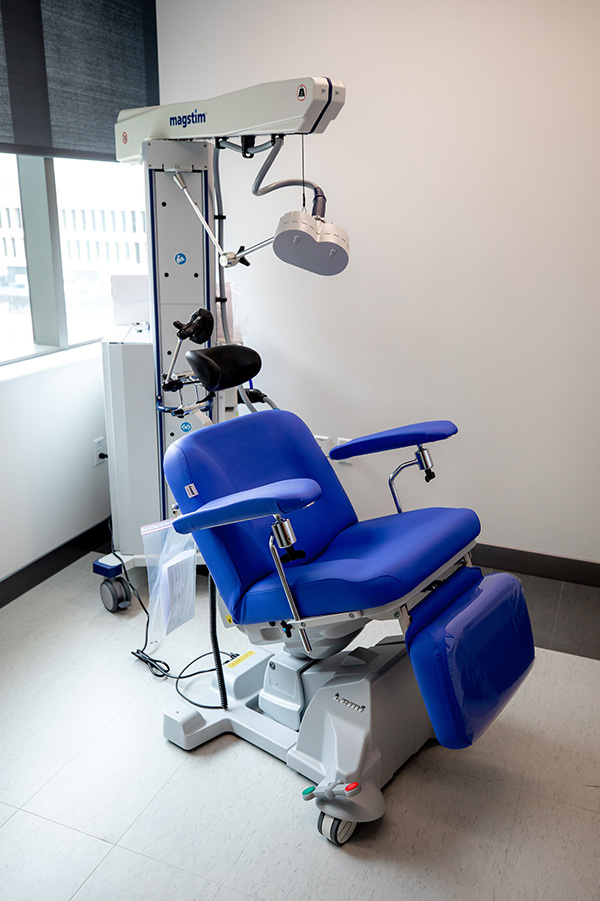 There are less than 10 TMS machines in the local Austin area. Unlike other Austin providers, patients at UT Health Austin will be seen by an academic mood disorder expert trained in treatment-resistant depression, rather than a general psychiatrist.

Other TMS advantages include:

“UT Health Austin is the clinical practice of the Dell Medical School, and we are actively pursuing research with TMS,” says Dr. Collier. “I hope to eventually offer this treatment to patients suffering from other disabling psychiatric conditions, but we need to determine the optimal way to do this via careful research trials.”