During the summer of 2021, Penn State student Dom Rainelli learned he had unknowingly been in kidney failure for several years and was in need of a kidney transplant. “I was experiencing migraines, which is not normal,” recalls Dom. “So I made an appointment with a doctor at Penn State. Within 2-3 hours after a series of blood tests, I received a call from the doctor saying I should go to the nearest emergency room immediately. One thing led to another, and I was diagnosed with having kidney disease for the last four years or so.”

Dom was diagnosed with IgA nephropathy, commonly referred to as Berger’s disease, which is an automimmune disease that attacks the kidneys. An antibody known as immunoglobulin A (IgA) builds up in the kidneys, causing local inflammation that, over time, impacts the kidneys’ ability to filter waste from blood. IgA nephropathy usually progresses slowly over years but can vary from person to person. It is also common to not experience any symptoms of IgA nephropathy, particularly in the early stages, which is why it can go undetected for many years and even decades in some cases. The migraines Dom was experiencing were caused by the high blood pressure that was occurring due to his degradation of kidney functioning.

When Dom was diagnosed in early summer, his kidney function was at 18%. By the following winter, it had declined to 11%. He was in dire need of a kidney transplant, and if he didn’t find an approved donor match soon, he would have to resort to dialysis until a donor kidney became available. “I was running out of time if I was going to receive a kidney before the point of dialysis,” explains Dom. Patients who undergo kidney transplantation before needing dialysis are known to have better outcomes.

Dom’s mother, Jamie Rainelli, moved to Austin after accepting the role of Office Manager for Texas Parents, The University of Texas at Austin’s official association of parents and families. Texas Parents serves all parents and families of enrolled undergraduate students at UT Austin who need assistance navigating university resources. While gathering resources for students and families across the university, Jamie came across an email from UT Health Austin, the clinical practice of the Dell Medical School at UT Austin, announcing the opening of the Abdominal Transplant Center, a clinical partnership between UT Health Austin and Ascension Seton.

“When I saw the email announcement last November, I thought, ‘How can I get Dom down here?’” shares Jamie. “We knew that Dom’s kidney function was worsening rapidly, and we were not all that happy with the care he was receiving up north. I also feared we were risking putting him on dialysis if we didn’t find a donor in time. But just like that, all the pieces seemed to fall into place.”

Originally, Dom was scheduled to receive his transplant at a hospital in Pennsylvania. In preparation of his upcoming surgery, he began taking online classes at Penn State to ensure he could continue to pursue his education throughout his transplant journey without delaying his graduation. However, Jamie wasn’t all that pleased about Dom receiving care so far away.

On Sunday, February 13, Dom and Kayla flew to Austin together. It was the first time they had seen each other in over a decade. Both Dom and Kayla met with Dr. Turgeon and UT Health Austin transplant nephrologist Brian K Lee, MD, who serves as Medical Director of the Kidney Transplant Program within the Abdominal Transplant Center, the next day. The transplant surgery was scheduled for the following week.

“When I learned that Dom was in kidney failure, donating my kidney wasn’t even a question,” shares Kayla, a military intelligence officer in the United States Army who has served on active duty for over 13 years. “Family is family, and when your family needs you, you show up.”

“I have thanked Kayla hundreds and thousands of times,” shares Dom. “She saved my life, and it’s unbelievable to think about how fast this happened and how she was immediately willing to give me her kidney.” Dom’s kidney transplant can be expected to last 7-20 years, meaning he will eventually need another donor.

“Throughout this entire process, I’ve had the easy part,” says Kayla. “I just had to say, ‘Hey, I’ll donate.’ It’s been an honor to be the person who gives Dom the gift of life, and my hope is that this gift will allow him to live a more fulfilled life.”

Kayla is recovering well and will return to her duty station in New York within a matter of weeks. If Kayla was ever to need a kidney in the future, she would be moved up the National Kidney Registry list because of her gift.

Learn more about the Living Kidney Donor Program within the Abdominal Transplant Center.

<br>If you are interested in being considered for living kidney donation, please complete the online medical screening questionnaire.

<br>”Every day, I feel better and better,” shares Dom. “And every year on the day of our surgery, Kayla and I will have our very own kidney party. After undergoing this process, I feel a lot closer to her. She feels like a sister to me.”

Within three months, Dom should feel the full effects of a healthy kidney. Dom will remain in the Austin area to be close to his care team at the Abdominal Transplant Center. He plans to return to Penn State briefly in May to attend graduation.

“Since arriving at UT Austin, I’ve fallen in love with the Longhorn community, and I can’t say enough about Dr. Turgeon and the rest of the care team at the Abdominal Transplant Center,” says Jamie. “Our experience has been absolutely amazing. They truly cared about Dom and Kayla and wanted to make sure they both received the best possible outcome. They made us all feel so comfortable, and I feel very blessed to be where we are today.”

Pediatric kidney transplant services are available to patients under the age of 18 through the Pediatric Abdominal Transplant Center.

For more information about the Pediatric Abdominal Transplant Center or to make an appointment, call 1-512-324-0070 or visit here.

For more information about the Abdominal Transplant Center or to make an appointment, please call 1-512-324-7930 or visit here. 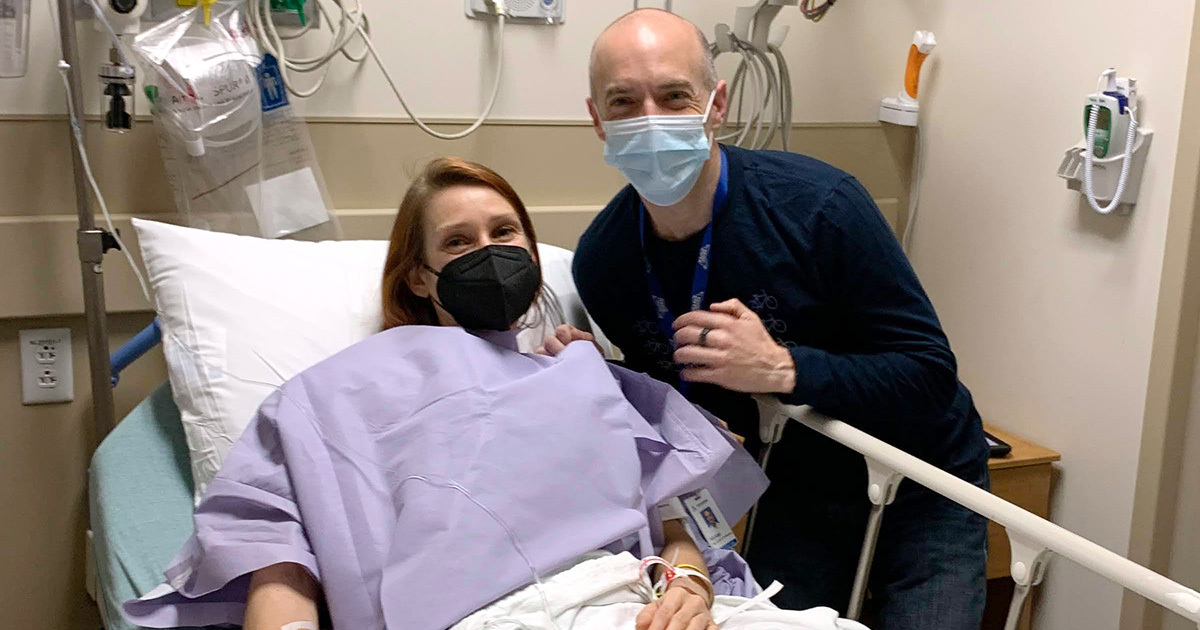 Austin marathon runner Victoria Threadgould becomes the Abdominal Transplant Center's first altruistic living kidney donor by donating one of her kidneys to a recipient in need.